Two years after our last meeting, the members of Bórax08001, met in Paris to participate in Circuits Bijoux.  These were three intense days, with two interventions in the city’s streets, an exhibition and a closing event in the bar l’Acte 3.

With this new experience Bórax08001 has continued its project Jewellery Displaced, initiated in 2011 at the B-Side Festival in Amsterdam, by exploring, planning and working as a team. Our idea of sharing artistic jewellery with the people in the street became alive again. By now we have found a formula: interventions in public spaces that allow people to discover, see and touch a piece of contemporary jewellery, live and directly. We, on the other hand, can observe and take note of people’s reactions.

We arrived at our meeting point on the indicated hour and took up our position in Jardin des Tuileries equiped with our mobile desks and mailbox. Suddenly safety guards appeared to inform us that we weren’t allowed to carry out our action inside the enclosure. So we crossed the garden and left through the main entrance to restart our intervention, postcards in hand, colour and graphite pencils ready. The idea was to let people reply to the question on the front of the postcard “What does your dream jewel look like?” with a drawing or a few words. We collected very varied designs, from detailed drawings, some with indications of the materials to be used, to forms and shapes open to our interpretation. We encountered a great variety of reactions when we asked this question: from the simple surprise to the elation of becoming the creator of one’s own desires. Through the act of speaking directly with the potential carrier of these imagined pieces of jewellery, we accumulated a fund of personal histories, memories and desires.

And now, by observing the gathered expressions we can look into a collective imaginary of a dreamed jewel. We’ll see what will happen with this action and its iteration in the future… We’d like to pose these questions: What is our imaginary of a jewel as creators?  What is the wearer’s?

For this second action, Bórax08001 invited other jewellers. We were 30 people in total. We exchanged our jewellery at the bar l’Acte 3, our starting point, to enjoy the feeling of wearing pieces made by others and in motion. 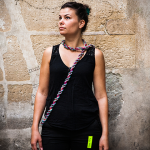 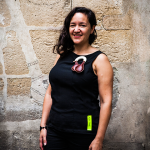 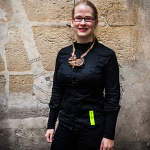 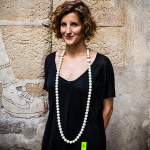 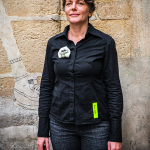 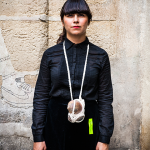 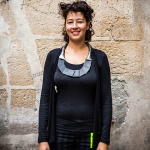 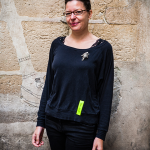 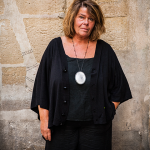 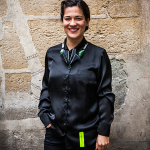 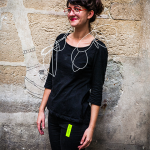 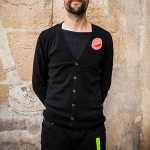 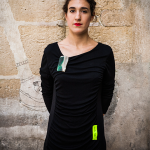 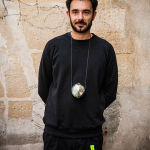 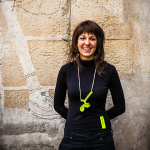 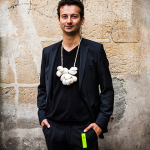 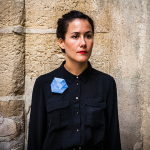 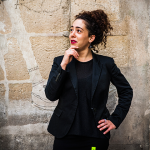 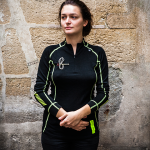 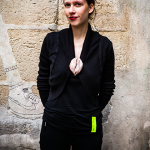 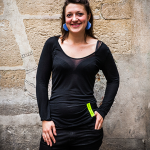 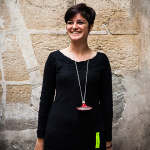 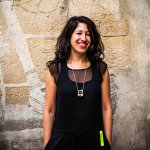 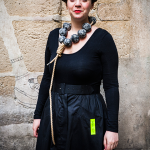 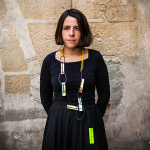 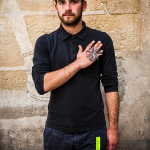 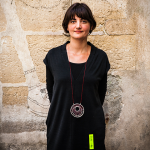 We left the bar in a march that was serene, black and bejewelled, slightly majestic and very emotional. On our way, we stopped at a junction busy with pedestrians and cars. People stopped to observe us, ask questions and take pictures. The experience of people reacting to a living exhibition of jewellery was invaluable.

We walked in a single line, adapting to the space available. Our line transformed itself into a circle when crossing a square. Sometimes we stopped to form a human corridor in order to allow the people around us to become protagonists and move freely between us. Initially people were afraid to pass between the two lines, but then curiosity took the upper hand. Moving on, our line disintegrated in a small park full of children and their minders. Back on the street our bejewelled bodies used the city as an enormous catwalk. In a shopping street crammed with people, the passage of our line provoked the surprised smiles of sales personnel and shoppers alike. During the whole experience, the sensation that we were creating a living exhibition was very strong. We were watched, touched, photographed, avoided, pointed at, sometimes ignored.. A bit of everything. To sum up: Normally, in the workshop the jeweller creates his/her pieces to present them to a gallery, shop or a museum. Through our actions Bórax08001 & Friends break out of this closed circle and open ourselves up in many ways.

Projection of the video of our interventions, Bórax08001 Tombola and final Party.

While we were active in the streets of Paris, the jewellery pieces that were not accompanying us were exhibited at the bar l’Acte 3 which also functioned as our base camp.

On the last day, we projected the video recording of our interventions and held a raffle of ten pieces that helped us to carry out our project in a new city (Paris). The pieces were sent to the winners in Spain, Switzerland, Germany, Belgium and Mexico. And finally, we celebrated this new adventure as a collective with all those who had accompanied us.

See you at the next city!